Prospective randomized controlled study in a tertiary care center. MATERIALS AND METHODS: Four hundred and twenty six women undergoing ET following controlled ovarian stimulation with a long GnRH agonist protocol were included. In addition to routine luteal’ phase support (LPS) with progesterone, women were randomized to receive three 1 mg doses of Lupride 6 days after oocyte retrieval. Computer’ generated randomization was done on the day of ET. Ongoing pregnancy rate beyond 20th week of gestation was the primary outcome measure. The trial was powered to detect a 13% absolute increase from an assumed 27% ongoing pregnancy rate in the control group, with an alpha error level of 0.05 and a beta error level of 0.2.

Luteal “phase deficiency occurs frequently in ovulation induction cycles using pituitary down” regulation with a GnRH agonist as well as in those using GnRH antagonists for ART. To cope with this problem, different regimens of luteal’ phase support have been suggested. Most of these regimens involve use of two therapeutic agents, HCG and progesterone, used separately or together in different doses and routes of administration. Adjuvants have been tried to further better the luteal support with either of these two agents used primarily for luteal support such as estradiol, aspirin, vitamin C etc., Some recent data, however, have suggested a beneficial effect of GnRH agonist administered in the luteal phase on ART outcomes. The mechanism of the presumed beneficial effect of luteal’ phase GnRH agonist administration is not clear.

and may be due to the drug action at multiple levels. It was hypothesized that GnRH agonist may support the corpus luteum by stimulating the secretion of LH by pituitary gonadotroph cells or by acting directly on the endometrium through the locally expressed GnRH receptors or by directly acting on the embryo itself. The administration of a single dose of GnRH agonist in the luteal phase was also shown to increase pregnancy, implantation, delivery and birth rates in recipients of donated oocytes in whom ovulation was suppressed and the corpus luteum was thus absent, suggesting a direct effect of GnRH agonist on the endometrium or the embryo. Despite stressing the importance of this finding, properly conducted trials to evaluate the reproducibility of these results were advised before widespread adoption of this simple yet seemingly effective strategy. In this report, we present a prospective randomized, controlled trial aimed to assess the effect of a three 1 mg doses of Inj. Lupride, administered 6 days after oocyte retrieval, on the probability of ongoing pregnancy rates following embryo transfer (ET) in cycles stimulated with a long GnRH agonist protocol. 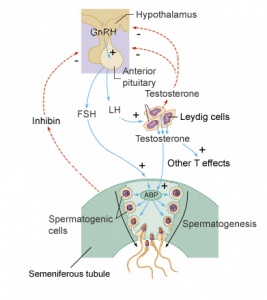