Hysteroscopy is a minimally invasive intervention that can be used to diagnose and treat many intrauterine and endocervical problems. Hysteroscopic polypectomy, myomectomy, and directed endometrial biopsy are just a few of the commonly performed procedures. Given their safety and efficacy, diagnostic and operative hysteroscopy have become standards in gynecologic practice.

SURGICAL ANATOMY
Endometrial Polyps
1. Endometrial polyps are localized overgrowths of the endometrium that project into the uterine cavity. They develop because of excessive multiplication of the endometrial cells, may be hormonally dependent and increase in size depending upon estrogen levels.
2. Polyps may be sessile or pedunculated and rarely include areas of neoplastic growth. Specifically, adenomatous hyperplasia and endometrial adenocarcinomas have been reported in only 0.6% of cases of endometrial polyps.
3. They can usually be detected on an ultrasound scan on second or third post-menstrual day or in mid-cycle, when estrogen levels are maximal, and the endometrium is echogenic.
4. The prevalence of polyps is estimated to be 10 to 24% in hysterectomy samples. Endometrial polyps are rare among women younger than 20 years of age.
5. The incidence of these polyps rises steadily with increasing age, peaks in the fifth decade and then declines after menopause.
Fibroids
1. These are well-circumscribed, non-cancerous tumors arising from the myometrium of the uterus. In addition to smooth muscle, leiomyomas are also composed of extra-cellular matrix, i.e. collagen, proteoglycan, fibronectin.
2. Fibroids are the most common solid pelvic tumors in women, causing symptoms in approximately 25% of reproductive age women. The overall prevalence increases to over 70%, inclusive of asymptomatic fibroids. These are usually detected in women in their 30s and 40s and may shrink after menopause in the absence of post-menopausal estrogen replacement therapy.
3. These are classified by their location in the uterus.
A. Subserosal ones are located just under the uterine serosa and may be pedunculated or sessile.
B. Intramural fibroids are found predominantly within the myometrium but may distort the uterine cavity or cause an irregular external uterine contour.
C. Submucous fibroids are located just under the uterine mucosa and, may be either pedunculated or sessile.
4. Tumors in subserosal and intramural locations comprise the majority (95%) of all leiomyomas; submucous leiomyomas make up the remaining 5%.
5. Although this classification scheme is widely used by clinicians, it suffers from the limitation that few leiomyomas are actually a single “pure” type. Most leiomyomas span more than one anatomic location and, therefore, are hybrids, e.g. a predominantly intramural leiomyomas with a submucous component.
6. Transformation of uterine leiomyomas to uterine leiomyosarcomas is extremely rare, and, in fact, many researchers and clinicians believe this type of transformation never occurs. Uterine leiomyosarcomas are found in approximately 0.1% of women with leiomyomas and are reported to be more frequently associated with large or rapidly growing fibroids.
Thickness of the Uterine Wall
Thickness of the Uterine Wall1 This knowledge allows the surgeon to manipulate the surgery on the basis of the area of the uterus where surgeon is operating. The uterus is longer and thicker in reproductive-aged women than in postmenopausal women.
PREOPERATIVE PREPARATION
Appropriate surgical management always begins with accurate history taking, physical examination, and careful workup of the suspected problem. In preparation for hysteroscopic procedures, the following considerations may be useful.
LAB STUDIES: Apart from general health tests, the following tests are required
â€¢ Blood typing and screening: With the risk of hemorrhage approaching 7-8% in some surgical hysteroscopic procedures, a sample in the blood bank increases the efficiency of access to replacement of blood products, if needed.
â€¢ Electrolyte determinations: In patients with medical disorders that predispose them to metabolic abnormalities, e.g. diuretic use, electrolytes should be tested preoperatively. Some surgeons routinely obtain baseline levels in case a significant deficit of distention medium occurs especially with a hyposmolar solution, whereas most obtain electrolyte levels intraoperatively or postoperatively only if a clinically significant fluid deficit occurs. The ultimate decision should be based on the type of case, the surgeonâ€™s skill, the suspected fluid absorption, and the ability to accurately ascertain fluid deficits in the operating room.
â€¢ Determination of human chorionic gonadotropin (hCG) levels is mandatory in any woman of reproductive age to exclude pregnancy.
â€¢ Cervical cultures: May be taken depending on prevalence of Chlamydia and gonorrhea in the population and a wet smear for bacterial vaginosis and trichomoniasis are recommended.
â€¢ Papanicolaou test: A normal or abnormal Pap smear that has been appropriately evaluated is required because trauma to the cervix may alter the appearance of any existing abnormalities.
IMAGING STUDIES
â€¢ Ultrasound of the lower abdomen is done postmenstrually to evaluate the size and shape of the uterus, endometrial thickness, fibroids (location (Figs 1 and 2), whether distorting the uterine cavity Fig. 3) as well as endometrial polyps (Fig. 4).
â€¢ Hysterosalpingogram or sonohysterosalpingogram is used for evaluating the uterine cavity and patency of fallopian tubes. However, to selectively look at the uterine cavity, sonohysterography or saline-infused sonography and 3-D ultrasound appear to have a better predictive value than that of hysterography for determining the location and size of fibroids and endometrial polyps (Fig. 5).
â€¢ CT scan or MRI: These are not usually needed unless the findings on ultrasound are inconclusive.
ANTIBIOTIC PROPHYLAXIS
Prophylactic antibiotics are not indicated unless the patient has clinically significant cardiac disease or a history of tubal occlusion due to pelvic inflammatory disease.
DIFFICULTIES
Cervical Stenosis
In patients with known cervical stenosis or tortuous cervical canals, preoperative vaginal or oral misoprostol, or intraoperative vasopressin 1% administered paracervically may be used to assist in cervical dilation.
Large Uterus
A uterus longer than 10 cm makes the case difficult, because the length of the hysteroscope is typically 35 cm and it must traverse the length of the uterus, cervix, and vagina while maintaining a position outside the introitus with enough distance to attach the camera and manipulate the fluid inflow-outflow valves and the surgical instruments. Also, maintaining intrauterine pressures in large cavities is more difficult than with small cavities. 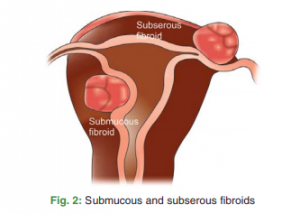