Unexplained infertility contributes to about 10â€“30% of subfertility, depending on diagnostic criteria. Intrauterine insemination (IUI) combined with controlled ovarian stimulation (COS) has been established as a first-line treatment for couples with unexplained infertility. The rationale of COS and IUI is to increase the number of available female and male gametes at the site of fertilization by achieving two to three dominant follicles, followed by a perfectly timed insemination. The use of IUI with COS in a well selected group of patients with unexplained infertility results in comparable cumulative pregnancy rate when compared to in vitro fertilization (IVF) and hence appears more cost effective.

To increase the chances of success in terms of pregnancy rate in COS IUI cycles, various therapeutic approaches have been tried by various researchers, such as different ovarian stimulation protocols, double insemination, and prevention of premature luteinizing hormone (LH) surge. According to the Cochrane review on ovarian stimulation protocols for IUI in the women with subfertility, use of gonadotropins for COS in IUI results in higher pregnancy rate than clomiphene citrate-stimulated cycles (odds ratio [OR] 1.8, 95% confidence interval [CI] 1.2â€“2.7). A recent meta-analysis clearly indicated that double insemination does not result in higher clinical pregnancy rate compared with single IUI in couples with unexplained infertility. Double insemination has been suggested by researchers because of the hypothesis that capacitated sperms in the inseminate are active for only 2â€“3 h, so they may not be able to back up ovulation which takes place in between the next 20 and 24 h. However, it appears that precise timing of insemination in relation to ovulation so as to enable active sperms to reach and fertilize the oocyte should obviate the need for double insemination.

Premature LH surge is defined as the surge that precedes the triggering of ovulation iatrogenically. Prospective data have shown that premature LH surge occurs in almost 23% of COS cycles (95% CI 22â€“43%), which appears quite significant and can interfere with the optimal timing of the insemination. LH surge can be effectively prevented by administering a gonadotropin releasing hormone (GnRH) agonist or GnRH antagonist. Use of GnRH agonist is not recommended in IUI cycles because of prolonged administration of injections prior to and during stimulation to achieve complete downregulation of GnRH receptors, risk of excessive follicular stimulation, and higher cost and inconvenience to the patient.

On the other hand, GnRH antagonist competitively blocks the GnRH receptors and immediately causes pituitary suppression, thereby reduces LH and follicle-stimulating hormone (FSH) secretion within 2â€“4 h. The efficacy of GnRH antagonist in prevention of premature LH surge is well-established.[17,18] The inhibitory effect of GnRH antagonist is reversible, dose-dependent and is associated with the equilibrium between endogenous GnRH and GnRH antagonist concentration. Cetrorelix (Cetrotide, EMD Serono) and Ganirelix (Antagon, Organon) are the two GnRH antagonists available for clinical use.
The protocols of GnRH antagonist administration in COS IUI cycles are well defined; however; the flexible regimen is the one which is used commonly in mild stimulation cycles. 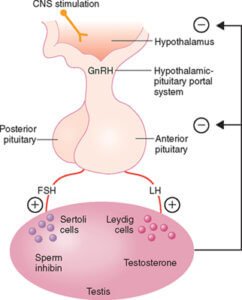