Reporting two cases of primary amenorrhea with primary infertility and underlying hypogonadotropic hypogonadism (HH). In both cases ovulation induction was initiated with highly purified human menopausal gonadotropin (hMG) in doses starting from 75 IU to the highest of 450 IU per day for 34 and 23 days respectively, with no follicular response and steroidogenesis. In the same cycle the gonadotropin preparation was changed to recombinant follicle stimulating hormone (r-hFSH) and recombinant luteinizing hormone(r-hLH) in doses of 225IU and 75IU respectively in the first case for 9 days and 150IU and 75IU respectively for 6 days in the second case, after which dominant follicles developed with subsequent ovulation. Both treatment cycles resulted in term live births. Hence, it appears that recombinant gonadotropins are more consistent in their activity as compared to the available urinary gonadotropins.

Hypogonadotropic hypogonadism is a condition of failure of gonadal function, characterized by low or undetectable levels of luteinizing hormone (LH) and follicle stimulating hormone (FSH) with subsequent estradiol deficiency and primary amenorrhea. The gonadotropin deficiency is owing to absence of pulsatile secretion of hypothalamic GnRH, or pathology within or around the pituitary which leads to complete arrest of ovarian follicular growth.
Pregnancy can be achieved in this condition through ovulation induction with exogenous gonadotropins. Gonadotropins were developed for clinical use for the first time in 1957, from urine of menopausal women. However, there were multi faceted problems in using gonadotropins recovered from this source. These problems ranged from collection of large quantities of urine to presence of urinary proteins in purified extracts, low specific activity causing inconsistency in the amount of gonadotropin, along with batch to batch variability. Ever since this development, scientists have been on the lookout of a more consistent preparation of gonadotropins which could take care of all these deficiencies. Recombinant gonadotropins were developed by the recombinant DNA technology and launched first time for clinical use in 1995 after approval by the European Medicines Evaluation Agency. These gonadotropins had batch to batch consistency with minimal variability in drug effect and high specific activity.
We are presenting here two cases of HH, who were started for ovulation induction with urinary hMG with almost no follicular response even after 34 and 23 days of administration respectively. Surprisingly, on changing the type of gonadotropin further to recombinant FSH and recombinant LH during the same cycle, follicular response was achieved within 9 and 6 days in both cases respectively, to cause successful ovulation and subsequent live birth.

Case-1 A 30 years old female with primary amenorrhea came with secondary infertility. She had one miscarriage which she conceived through ovarian stimulation and intrauterine insemination. Hormonal assay diagnosed her as a case of hypogonadotrophic hypogonadism. Injections of hMG were given starting from 75 IU/day in incremental doses, up to 450 IU/day for duration of 34 days with no recruitment of follicles. Subsequently r-hFSH and r-hLH were used in 3:1 ratio (225:75 IU) replacing hMG following which ovulation of two dominant follicles was achieved with 9 days of stimulation.
Case-2 Our second case was a 32 year old hypogonadotrophic hypogonadic woman with primary amenorrhea and primary infertility. Ovulation induction was initiated with 75 IU/day of hMG and the dosage was increased to 450 IU with no recruitment of follicles till 23 days of drug administration. We switched over to r-hFSH and recombinant r-hLH in 2:1 ratio (150:75 IU) and administered these for 6 days on a daily basis after which 2 dominant follicles were obtained, which ovulated following human chorionic gonadotropin (hCG) trigger.

Ovarian dysgenesis (OD) is the most common differential diagnosis due to similar clinical presentation of primary amenorrhea, delayed puberty and infertility.
Serum gonadotropin levels are most significant in order to differentiate between the two. OD is characterized by high FSH levels with irregular release, less elevated and more stable LH level, while HH reveals sharply reduced monotonous FSH and LH levels.

In both patients, 2 dominant follicles were formed after change over to r-hFSH and r-hLH. Pre-ovulatory estradiol levels were 329pg/ml and 137pg/ml in case 1 and 2 respectively. Both of them conceived with twin pregnancy and subsequent live births at term gestation.

In normo-gonadotropic females basal FSH and LH is sufficient for ovarian response, hence, stimulation with FSH alone leads to optimal folliculogenesis with adequate steroid production. However, in HH the deficiency of FSH and LH both is profound and as per “two cells two gonadotropin” theory both the gonadotropins are essential for adequate follicular growth and steroidogenesis. Pulsatile GnRH was the first method used for gonadotropin secretion leading to monofollicular ovulation in such patients. Later on pulsatile GnRH agonist was abandoned in favor of hMG due to need for the cumbersome electronic pump, inconvenience of drug administration as well as the side effects and complications of using pulsatile GnRH. Therefore, hMG became the mainstay of treatment as it contained both FSH and LH in 1:1 ratio hence, could provide both the essential gonadotropins in such cases. However, urinary gonadotropins are considered to be inconsistent in their action with variable and low specific activity as compared to recombinant human gonadotropin, which apart from having batch to batch consistency also has very high specific activity. This possibly appears to be the reason of the beneficial effect seen in follicular growth on changing over from hMG to recombinant gonadotropin in both our cases. A recent systematic review and meta-analysis compared the efficacy of urinary gonadotropin to recombinant gonadotropin in intrauterine insemination cycles for women with unexplained infertility and concluded that recombinant preparation was required in half the dose when compared to highly purified urinary preparation to achieve the same pregnancy rate. However, when both gonadotropin where used in the same dose pregnancy rates was significantly lower in the urinary gonadotropin group. Another recent study from Italy compared recombinant gonadotropin to hMG in 70 women with HH and found similar ovulation rates in both groups but significantly higher pregnancy rates in the recombinant gonadotropin group.

Administration of recombinant gonadotropins has shown in most trials to have more consistent action with no batch to batch variability. Addition of r-hLH in minimal doses to r-hFSH appears optimal in terms of folliculogenesis and steroid production to achieve ovulatory response even in cases of extreme gonadotropin deficiency such as in hypogonadotropic hypogonadism. 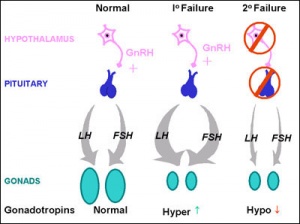